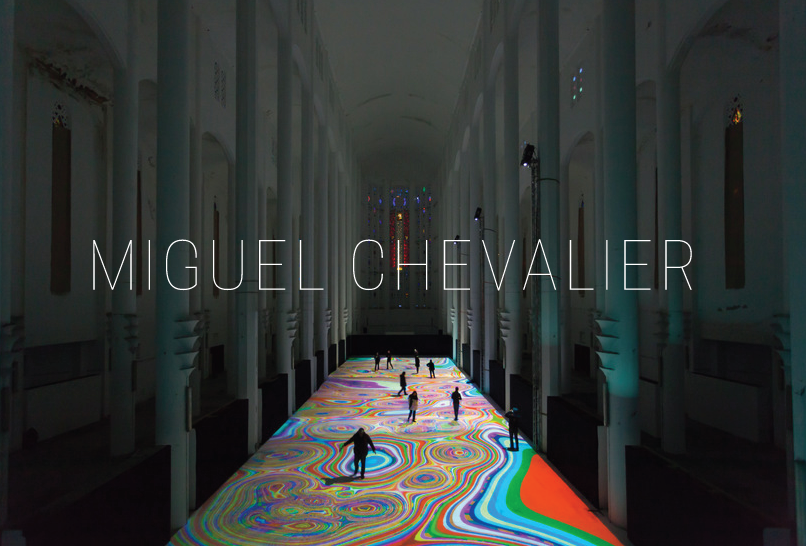 Miguel Chevalier is a world-reknown multimedia artist who has been pushing the envelope for digital and virtual art since the 1980s. Hailed as a vanguard of his medium, Miguel has always thrived on the cutting edge, exhibiting an early preference and proficiency for digital art and computers. His subject matter is as vast as the age of information allows, focusing on nature, artifice, flow and the interconnectedness of all things. Adding an element of interaction with audiences to his installations makes them all the more poignant, complex and mesmerizing.

He recently made waves with his “Magic Carpets” installation at the Sacre Coeur cathedral in Morocco. The space itself, already a work of soaring inspiration was greatly enhanced by elaborate floor projections - an organic theme of replicating cells, splitting and merging at various paces and influenced by the footsteps of those treading above. It’s as if Miguel is elevating life itself to a sacred status in such a hallowed space, while once again lifting the illusory veil of separation that divides us. The video below is but one example of why Miguel is one of the most influential modern artists of our time.

As you can see, pictures really do no justice to this man’s work, so we are breaking from our normal format here on the blog to showcase more of his work in video. Here are a few of our favorites:

Digging deeper into the artificial hemisphere of his muse, Miguel brings us his transparent shimmering vision of urban sprawl. Stylistically evocative of a marriage between 3D CAD software and the movie Tron, this exhibit features intricate lines assembled into seemingly infinite configurations of buildings and spaces, transporting the viewer to a futuristic, high tech dreamworld that they can navigate at will.

Miguel Chevalier delves into the visual poetry that thrives between the natural and artificial worlds. Here he explores the symbiotic nature of two very different realities in observation of the plant kingdom through overlapping and complex layers of plant patterns which often sway in the breeze, or rotate and evolve much like the earth itself.

Miguel puts a 21st century spin on geometrically inspired Islamic art with movement of overlapping shapes that number in the thousands. It’s a contemporary nod to that traditional art of zelliges, arabesques and mosaics, as well as the world of “Mashrabiya” (latticework). You can clearly see the masses, especially children, enjoying the immersive experience of his work in this video.

### The Origin of the World

Probably the most unmistakeably iconic of his works, this installation presents a primordial microcosm of organic shapes, interspersed with highly pixelated graphics reminiscent of the 8-bit era. Miguel explores a wide range of color, form and emotion in this groundbreaking piece that interacts with audiences in a way few artists could hope to achieve. This is what happens when you attain a perfect synergy and dominance over various artforms and bring them together seamlessly.

All images courtesy of Miguel Chevalier. View more at his home page .
Previous Post
Back to Main
Next Post